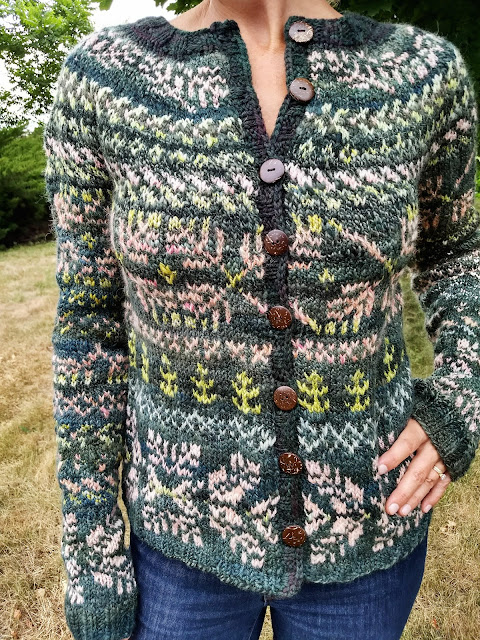 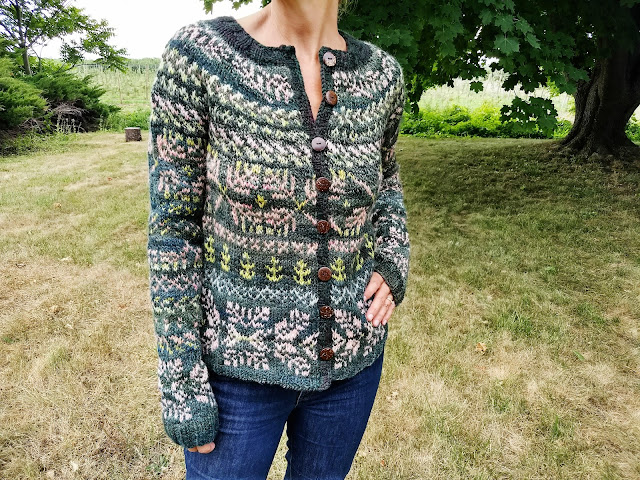 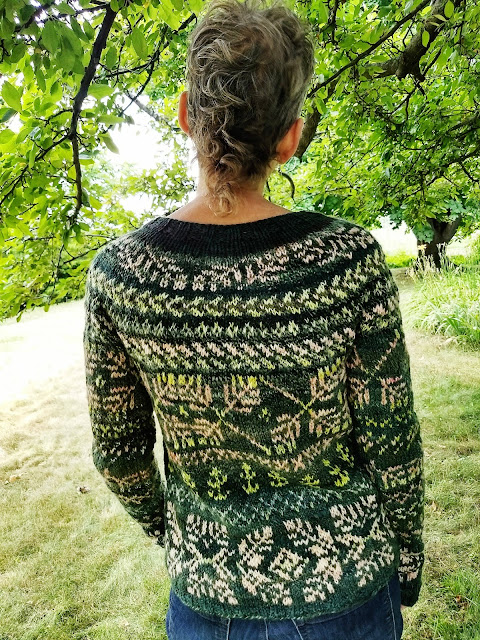 I’m pretty pleased with this one.  It does make me very happy to be finding such a good use for my handspun, and I’m quite proud of having done so much of the work of this garment my own self.  I can’t take credit for the idea—that comes from Rachel from Spincycle Yarns, who wanted to use the charts from The Twigs by Junko Okamoto in a dk weight cardigan.  The Twigs has eleventy-seven charts, and Rachel did the hard work of figuring out where they would work in a larger gauge cardigan, and all I did was trail along behind her, doing the same thing.  You can see her project here, and listen to her talk about it briefly here.  I was, as I’ve said, completely absorbed by this project.  I worked it in the round, with six steek stitches at the front, and since most of these handspun yarns are mostly merino, it was a little dodgy—ends flying loose everywhere.  I spent a long evening with a sharp darning needle, weaving them in and then I secured all the raw edges underneath a ribbon at the inside.  It looks pretty tidy, and it feels somewhat secure.  Whew. 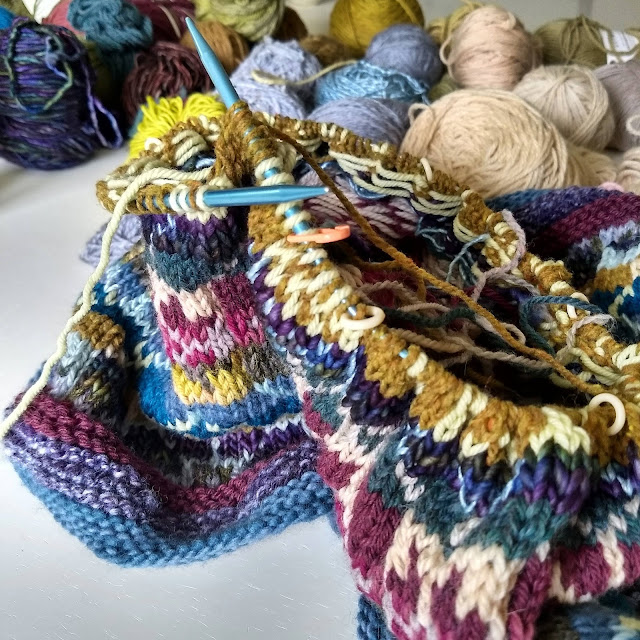 I just want to do more of this now.  I’ve revived an old work-in-progress, because it, too, is all over colorwork at a fairly large gauge, and whoo!  It’s so much fun.  This project was started maybe two years ago and then basically abandoned when I had to put it away to make room for something else, and you guys, that is a mistake.  If I put it away, it stops existing.  I don’t even count it as one of my works-in-progress.  It just goes completely away, except for the nagging feeling that I should be either working on it or unraveling it.  I thought a few times about unraveling this one, but every time I looked at it, I just really liked it again.  Inspiration for this one came from the one and only Kaffe Fassett, and I’m still inspired.  I am not putting this away anymore.  There is yarn all over the table, and it isn’t going anywhere until this cardigan is finished.  It’s a mess.  I’m motivated.
Posted by Kristen at 11:31 AM 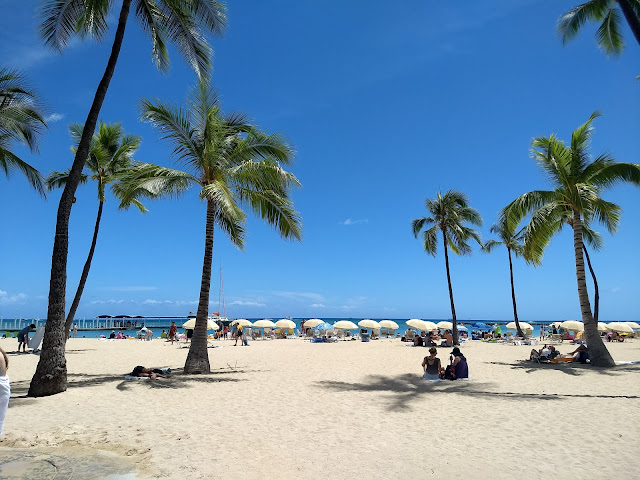 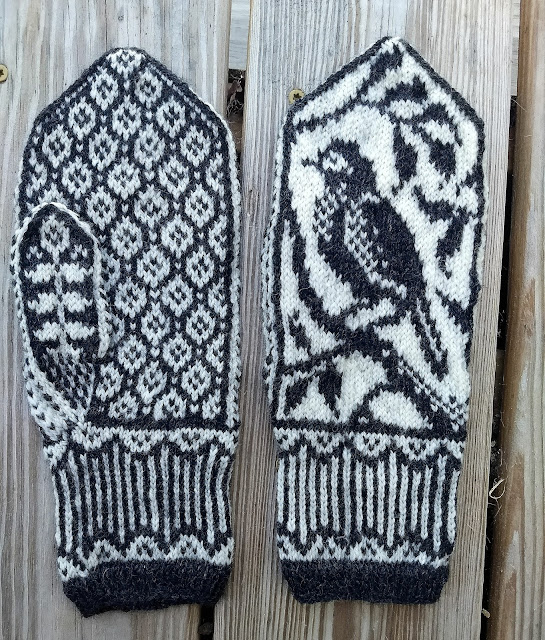 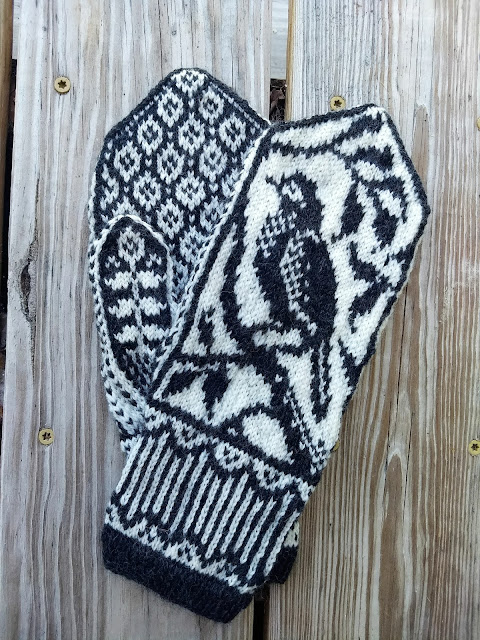 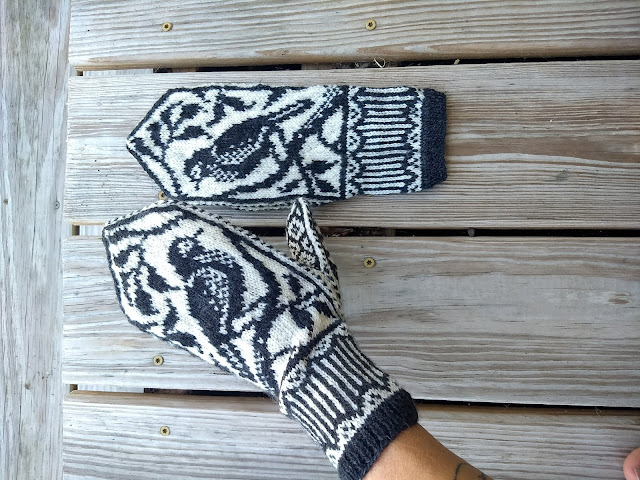 So we went to Hawaii.  I know!  Waikiki Beach is as advertised—packed solid with surfers and tourists and little kids in water wings.  Frangipani blossoms drifted down from the trees and into my hair.  The coral sand was soft and slippery, like walking through sesame seeds.  I ate sushi and fresh pineapple and huge amounts of coconut ice cream, and Spam, and more sushi.  I found a pearl in an oyster.  The water of the tropical Pacific is clear and slightly bracing and it all felt so friendly and happy.  It was blissful.  I think if I were to stay there long enough, those scowl lines between my eyebrows that never disappear would disappear.

I didn’t even knit while I was there.  Who am I???  Honestly, I don’t really know how people do that anyway—the beach is a salty, windy, sticky, messy place.  It’s all I can do to keep my hat from flying away.  Knitting doesn’t really seem necessary there, or actually even all that possible.  Fortunately, getting to Hawaii and then home again involves two pretty long plane flights, which gave me a chance to make these mittens.  They were the perfect travel project—absorbing, but small.  It is 90 degrees F today and for once I don’t need any mittens, and I’m kinda missing those trade winds.  Also, I need a nap.  Hawaii is six time zones away and I can’t sleep when I’m supposed to and now my brain feels kind of soupy and fuddled.
Posted by Kristen at 4:12 PM 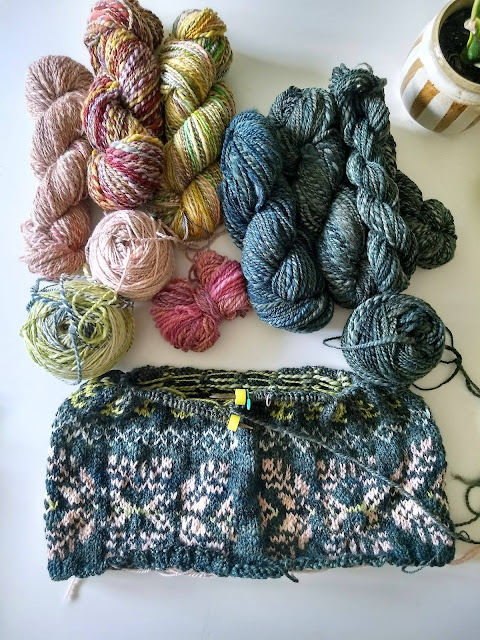 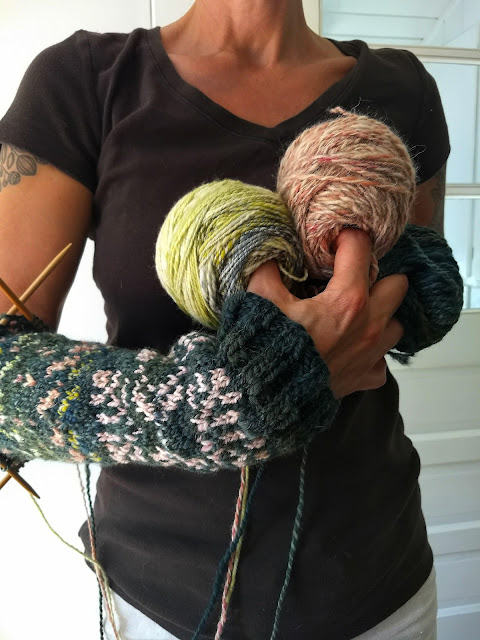 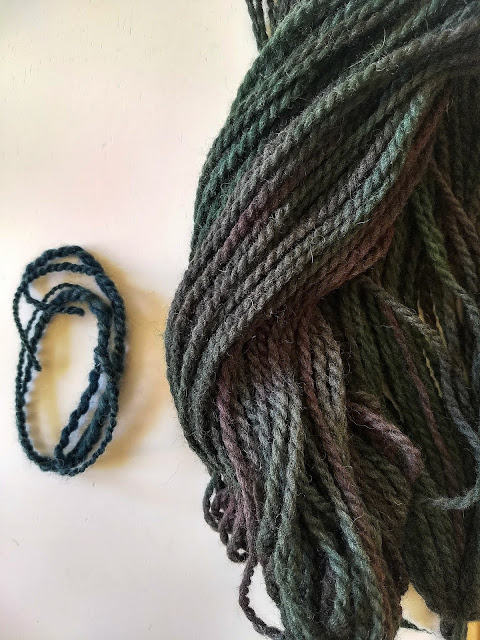 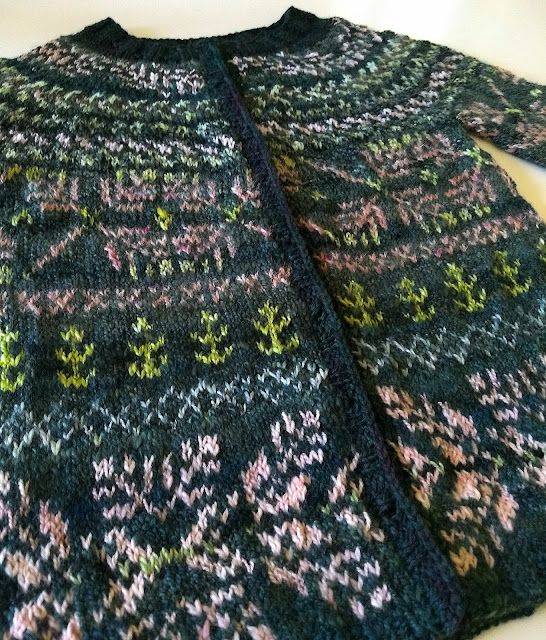 There’s no way to explain this except to say I had The Fever.  I was cleaning behind the bookcase last week and letting knitting podcasts just auto play in the background, when, happening to look up for a moment, saw Kristy Glass asking one of the makers of Spincycle Yarns about the sweater she was wearing.  I thought about my stash of handspun yarn, none of which is enough of one color or fiber or ply angle or anything else to make a whole garment.  I love all these skeins, but I had started to feel guilty about having them in the cupboard, taking up space, when they were probably just destined to be a pile of lumpy hats nobody wanted.  I remembered this from last summer.  I put down my dust cloth, bought the pattern for The Twigs and started winding yarn.

The Fever got worse, because over the next few days, the weather suddenly went from summery to sultry and, undeterred—in fact, ecstatic—the garment grew into a sweltering lapful of knitting.  Let me just say that I don’t mind this one bit.  I sit in the shade, I aim a huge fan at my face, I keep a dripping glass of iced coffee nearby.  I am a summer baby, and it is never too hot for me to knit.  But I am aware that I will not be needing to wear this one for a long time.  It is knit at a gauge of 4 stitches per inch, in fairly densely spun wool.  It is heavy.  This garment is for the future; for a distant season that I hope does not arrive too early, and frankly I wouldn’t mind if it never got cold enough to wear this, but I know it will, and sooner than I’d like...anyway, as I knit and it was predictably lumpy and weird and the contrast colors veered in and out of matching the main color in value, I just kept shaking my head at myself and saying, well, I’ve got the fever.

Then, five rows and the button bands from the end, I ran out of yarn.  This, you may recall, is yarn I spun by hand, from a bump of roving that had been in my stash since the heyday of The Backstreet Boys, and there was no getting any more.  Since the whole point of the project had been to use some of the handspun, I was determined not to buy any yarn.  A little story for you:  when we were thirteen or so, my best friend and I got hungry in the middle of a sleepover, so late at night, we crept into her mom’s kitchen and baked a cake from a mix.  It wasn’t making a big enough mess, so we got out the food coloring and started dumping stuff in, and pretty soon, that cake was army green, with no going back.  It looked gruesome, and very un-foodlike.  We left it on the counter, turned our attention to oatmeal and honey facial treatments, and eventually went to sleep.  In the morning, we got up to find her dad standing over the pan, eating a huge piece of it with a fork, and smacking his lips like it was the best cake in the world.  As I was looking at the last bit of the hand-dyed, handspun yarn disappearing into the top of the yoke as I knit, I thought about that, and how easily we got bluish-greenish out of kitchen food coloring.  So I scrounged up some Cascade Ecological Wool, leftover from something else, rummaged in the back of the cupboard behind the candy sprinkles and started dumping stuff into the dyepot.  The result was close, but not quite.  It’s not perfect, but nothing about this poor thing is perfect in any way.  It is sort of motley and wobbly, and for the first time ever, I think my cut steek might collapse like a house of cards, and it still doesn’t have any buttons, but honestly, I truly love this sweater.  I’ll show it to you next time, all finished with buttons and everything, but it’ll be a long time drying, and a really long time before I can wear it.
Posted by Kristen at 1:59 PM 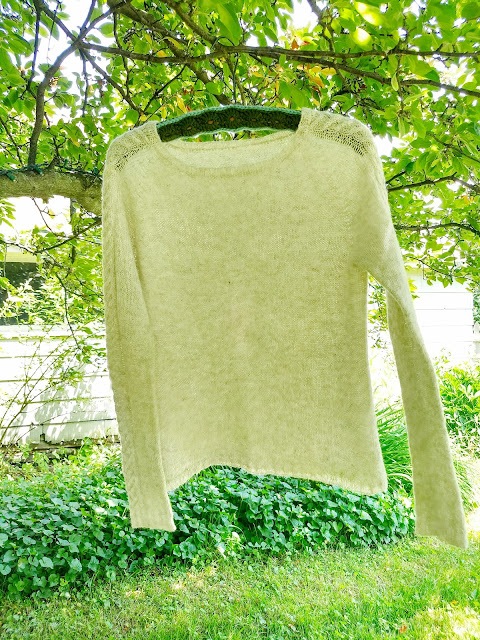 I really can’t get enough of summer.  The cherry tree is bursting with fruit; the lower branches are almost hanging to the ground.  When you have to bend down a little bit to pick the sweet cherries that are growing right there in your own yard, you know your life is pretty nice.  I can eat cherries until my clothes don’t fit anymore, and there are still more than plenty to share.  The robins and the catbirds are onto them, too, and there’s a lot of fruit on the ground already, perfect cherries with one dainty bite missing.  I went out there barefoot the other day, bowl in hand, and stained my feet orange.  Adventures in natural dyeing, inadvertent edition.

Doc was surfing around on Craigslist awhile back, and said suddenly, “Is Tunis any good?”  I was imagining some kind of North African tagine dish possibly made with peanuts, so I said, “I don’t know, what’s in it?  Are we looking at restaurants?  I’m in, let’s go.”  “No,” he said, “Tunis fleece.  Sheep.”  Actually, I don’t know squat about fleeces, but I know I like yarn, which comes from wool, which comes from sheep, so I said “Ack!  Yes!  Good!”  And got in the car before he could change his mind.  So we came home with two [there were two, you can’t just leave things like that sitting there!] lambswool fleeces, which were creamy white, gorgeously crimpy and utterly packed full of thorns and hay.  I tried to imagine carding it all by hand and my courage failed me.  I tried to imagine stashing it in the upstairs closet and worrying about it later, and I knew it would keep me awake at night to do that.  I found these plans for building a drum carder at home, and Doc said he’d be thrilled to do that for me, but when the time came to start getting parts together, he made kind of a weary face, probably imagining many hours in the hot workshop hunting down variously-sized bolts while I reclined in the shade of the umbrella and he said, “Eh.  Let’s just buy one.”  It arrived the other day, and I carded one of the fleeces and even though my knuckles look like hamburger [don’t touch those teeth while the thing is turning, duh!  That hurts!] it was wonderfully fun, and now I have a bunch of fluffy batts, waiting to be spun.  I stacked them up on the table to admire them, and they looked like the world’s biggest cinnamon roll, ready for the oven.

Knowing that more yarn is headed into the stash soon [I’ll spin it soon!  Will too!] I decided to crack on with the my Wheat sweater, which I started back in March and then temporarily abandoned, and which had nothing left to make but the sleeves.  A sleeve takes no more than a few hours of knitting, but the idea of sleeves takes weeks of procrastination.   You knitters know what I’m talking about.  Sleeves!  Am I right?  These sleeves are all cabled, too, which added extra time to the putting-off, and just a little extra time to the knitting.  I made a few modifications to the hemline and edge treatments in order to suit my fancy and I knit this in Holst Supersoft, in the colorway “Nougat.”  I’m telling you, this thing is as light as a breath of air, and softer than you would believe.  It is like wearing nothing, but warm, too, and that palest pale gray color is everything I want.  That yarn.  Swoon.
Posted by Kristen at 12:55 PM