Romney Rhaine Pullover, made by me 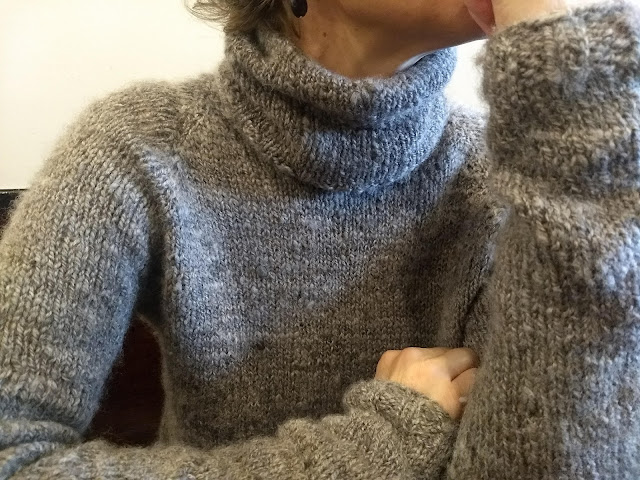 This project feels like a precious accomplishment.  This is my first garment knit from my own pattern, using my own yarn, made from the very first fleece I washed, carded, and spun myself.  The only thing more I could have done on to make this sweater my own is to have raised the sheep, and when I'm standing there in the festival barns looking at the little smiling lambs with their curly hair and their floppy tails, I am so sorely tempted.  Sheep are so cute.  They seem very amenable.  I start to thinking, heck, a lamb is really just a puppy, isn't it?  How different can it be, really?  I kid; I'm sure it couldn't be more different, and I don't know the first thing about raising sheep.  Also, as you may recall, Doc very expertly put the kibosh on my erstwhile shepherd dreams by suggesting that we simply go to the fiber festival each year and buy two fleeces.  Well, I mean, that's genius actually, because what I really want is one very good dog who likes to nap with me and also a whole lot of yarn.  Washing, carding, spinning and knitting up a fleece is a lengthy project, but my goodness, as I've discovered, the rewards are huge. 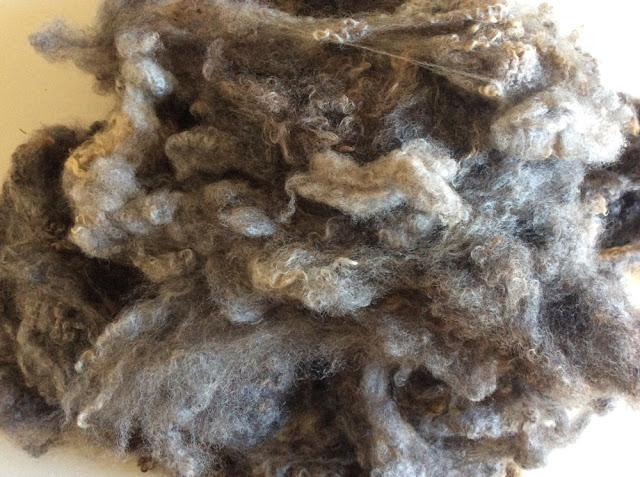 Here's the fleece, fresh from the bath.  It's a Romney/BFL cross, from an ewe named "Rhaine"--her name was on the tag, isn't that just so lovely?  Rhaine's fleece was curly and soft and I had heard such frankly discouraging things about Romney fleeces--that they are suitable for outerwear and carpets, that they are scratchy, that they are annoying to spin--but goodness, she was just beautiful.  Soft and fluffy and just about clean already.  She was loved, I could tell.  And her fleece was almost the same color and curly-ness as my own hair, so I felt we were two peas and meant to be together.

There were 4.5 lbs of Rhaine's fleece, unwashed.  I forgot to weigh it after washing, but honestly, it was a small fraction of that.  It seemed to weigh nothing at all.  I lightly sorted it according to color--what you see here is the lightest of three grays--and then carded it (very inexpertly) on my new drum carder, letting a lot of blobs go through and learning a lot as I went, and then I spun the carded batts woolen-style, because that's the kind of spinning I like to do and the kind of yarn I like to have.  The yarn still had a lot of blobs, but it also had a lot of character, and it was so, so soft. 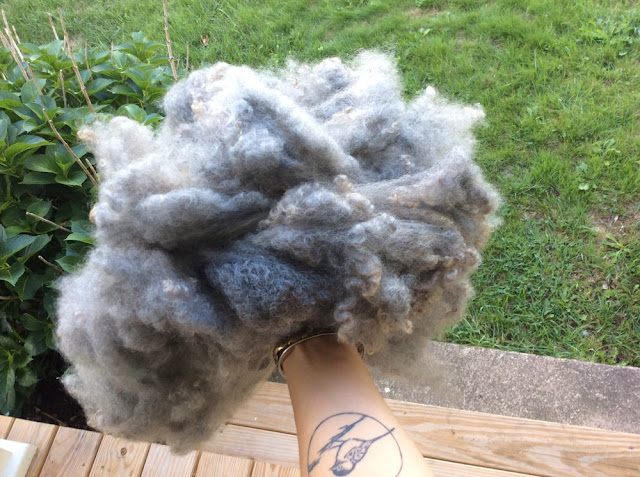 I searched for a pattern and tried a few, but another thing I've learned is that when I try to fit my handspun yarn, especially one that's fairly uneven and somewhat unconventional--into a pattern written for commercial yarn, it's an exercise in frustration and futility and that when I'm using handspun yarn, it's best to make one up.  So that's what I've done here. 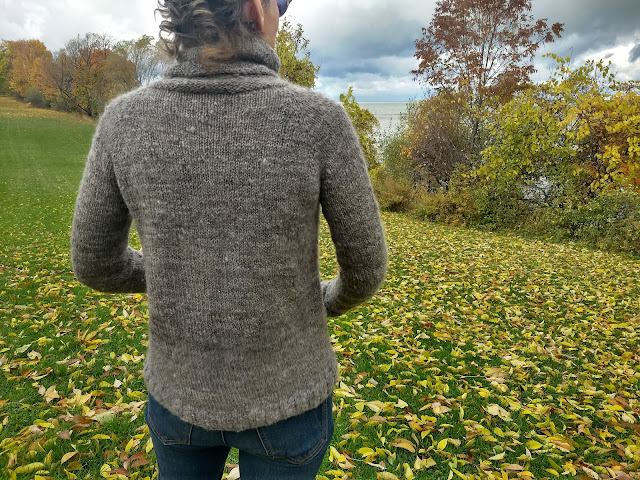 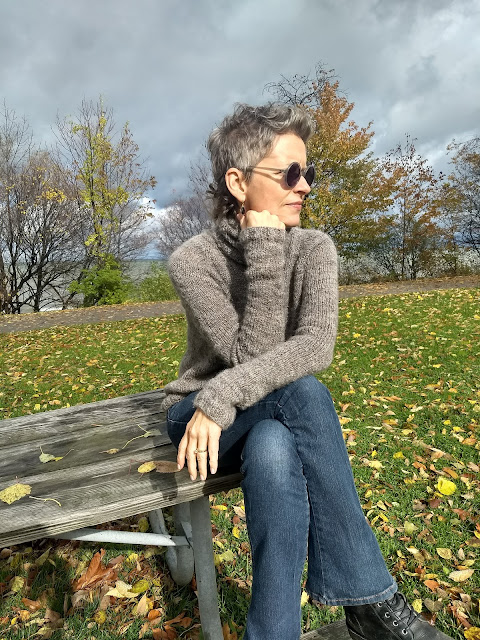 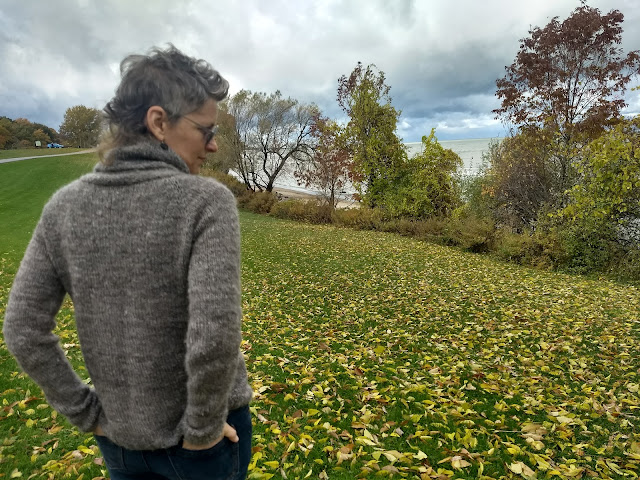 I followed my usual formula of drawing my idea, measuring myself, making a swatch, and doing some elementary school level arithmetic, and then just knit the thing, mostly in the car on the way to and from Rhinebeck.  This one has (as usual) a raglan yoke and extra-long sleeves, very slight a-line shaping on the body, and a tremendous voluminous close-fitting turtleneck, because those are all the things I love best in a sweater. 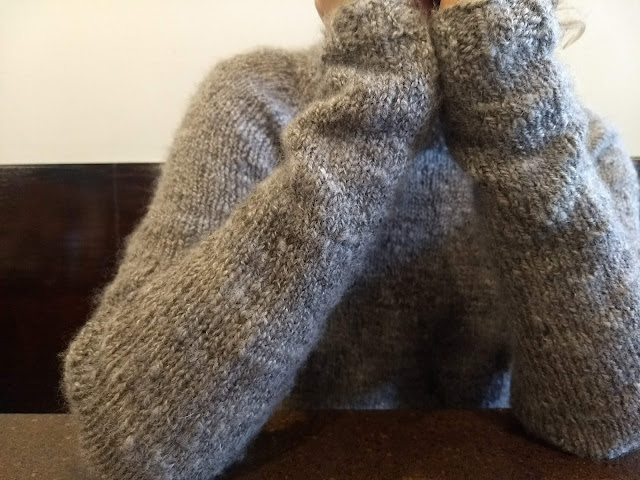 I really don't think I could have made anything more perfectly suited to this fiber, this knitter, and this girl who wants a warm, comfortable sweater.  I am wearing it next to my skin, next to my neck, and it is infallibly soft.  It has shine, and halo.  It is beautiful.  It is warm and cozy and comforting and more than a little bit satisfying.  It took a long time to get here, and my beginner fleece-prep efforts are far from perfect, but of course there's no reason to expect perfection from handspun yarn.  Perfection can be bought; this is made by me.
Posted by Kristen at 3:17 PM